A relatively small bunch this time, because RL is being RL.  Still, I persevere. 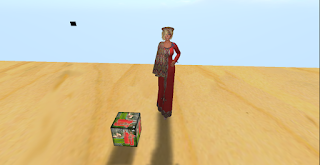 It is an Abyssinian maid, though I don't have a dulcimer... I messaged Tali to say I needed one, and caused her some confusion.  Anyway.  I know where I can lay my hands on a dulcimer if I want one.  I will have more to say on that topic later.  In the meantime, this is an Abyssinian Woman outfit from stop 41, Tayren's Fantasy Fashions, and I think it's pretty nice, even though there are a few clipping issues with my non-standard shape.  There's a pretty similar outfit for an Abyssinian Bloke in that box by my feet. 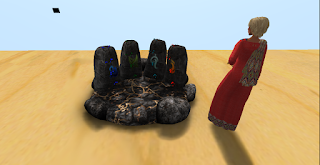 Four Elements Stones, a decorative piece from number 42, United InshCon.  I picked up a couple of other things at this particular shop, whose name will be familiar to, for example, people who've frequented Fantasy Faire on occasion.  I need romantic haunted ruins and old temples and things, I have a chunk of a sim to furnish.  There is a reason I'm standing around on a big piece of plywood, you know. 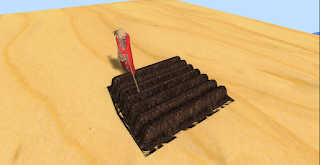 Another animation, with props, from number 43, Razmataz.  This is a hoeing animation, complete with a hoe to hoe with, and a patch of dirt to hoe.  It's not particularly difficult, so it's not a tough row to hoe.  Still, nice work on the animation and the props.  I dig it.  (Tee hee.  Or, even, ho ho ho.  All right, I'll stop.)

I'm going to abandon my usual custom of putting the descriptive paragraph under the picture, here, on account of Blogger choked on the picture after it, and I can't prise the two apart for some reason.  Never mind.  The picture below shows a Genie Lamp from stop 44, Panda Panda, but does not show it playing a sprightly tune, because it is only a picture.  I like Panda Panda's whimsical stuff.  I went to the lengths of also buying a wind-up musical camel there, which I did not strictly need.  And the proprietor noticed me doing this, and was kind enough to give me an additional gift, whose nature is... not convenient to describe.  So, all in all, I did jolly well at this stop.  And it is a lot of fun. 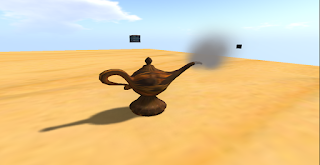 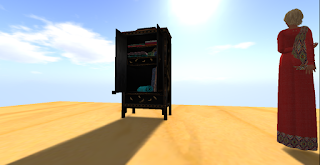 The picture above, which is stuck to the one above it for reasons known only to Blogger's software, is of a  Chinese Cabinet from number 45, Casa de Bebe.  This thing is well-made, efficient mesh design, opening and closing doors, and it comes in two versions.  One of them, seen here, has those rolls of silk inside, and the other is empty, so you can put whatever you like inside it.  I tried to rez both, for comparison purposes, and wound up with two of the ones with silk in, so I deleted one of them.  This is not down to any problem with the item itself, it's just that I'd had a really rough day. 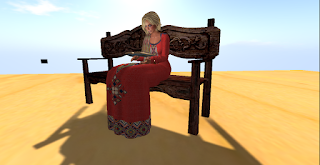 Peacock Garden Bench from number 46, Botanica.  Comes with animations menu and props, like the little book I'm reading there.  Nice thing, but a bit of normal mapping on those elaborate carvings, and it could have been an outstandingly nice thing.  Just a suggestion, guys. 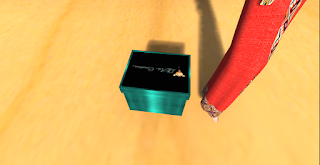 Texture pack from number 47, LilArt Creations.  The contents are cool, I promise you. 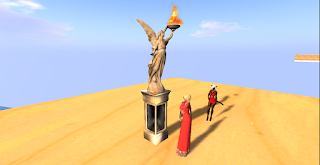 This is a bit of fun.  It's from stop 48, Imagine Flowers and Garden, and it's just called "The Silk Road Hunt Gift", so I really didn't know what to expect.  In the event, it turned out to be this rather nice statue with a flaming thingy.  Pretty neat. 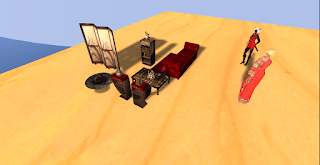 "Stranger in Paradise" furniture set from number 49, An Lema.  I always have trouble finding their Hunt object, and always have to forgive them because the stuff inside it is really good.  This is typically excellent quality.  That folding screen is only the second one we've seen in this Hunt so far... come to think of it, where are the small octagonal tables, this year, too? 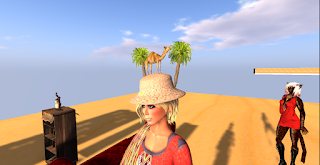 Finally, I have a camel on my head, courtesy of stop 50, the Ferret and Hedgie Shoppee.  Tasteful headgear of this kind is always welcome.  (Actually, it's quite restrained by their usual standards.)

That's all for now.  With luck, I am on course to have everything unpacked and described before the Hunt ends on June 30th.  Act now, and you too could have a camel on your head!