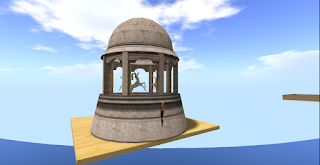 Tali was still resting on that An Lema furniture set when I got back.  "I won't disturb her," I thought.  "I will just open this  Centaur Pavilion from stop 51, House of ACCentaury, very quietly and discreetly, so she won't notice."

The centaur statues in the middle revolve, by the way, because of course they do. 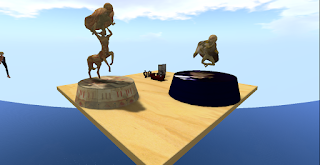 More centaurs and genies, from the same stop.  I don't know what I'd use them for, but by gum they're impressive. 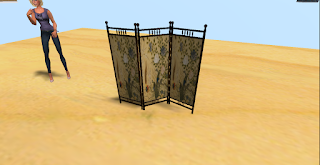 Room Divider from number 52, Little Scamp Designs.  We are low on screens, this Hunt.  And nary a small octagonal table to be seen!  Anyway, this counts towards the screens quota, and it is a very nice one. 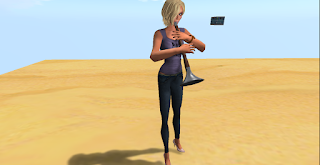 This is a Suona, from stop 53, Mikki Miles Musical Instruments.  It plays a tune when you click on it.  Mikki Miles does a lot of instruments like that - I really must go back and look for a dulcimer, you know.  I did pick up a set of bagpipes there, and even persuaded Tali to listen to them.  She was very tactful, especially when you consider that I could have got much the same effect just by tucking her under my arm and biting her tail. 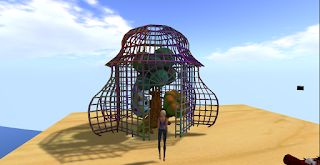 M. Pierre Ceriano at stop 54 provided this Rosery of Xanadu, which may not be strictly useful, but is quite spectacular, and right in tune with the theme of the Hunt.  Unlike me on the bagpipes. 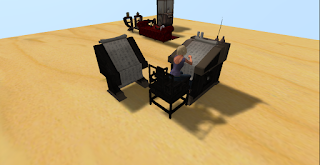 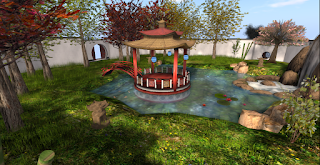 So is this Xanadu Garden from stop 56, Salome Designs.  It impressed us both, in fact, enough that it may well become a permanent fixture at our new home.  Not scripted or anything, just a gorgeous garden to wander around in. 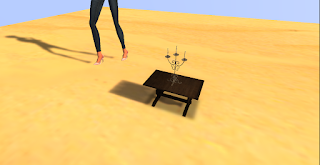 A Cake Fox Decor Candlestick On Sidetable from number 57, Cake Fox.  As is usual, it's a nice-looking piece from a skilled designer.  It's not an octagonal table, though.  I mourn for the glory days of the small octagonal tables. 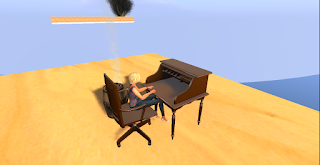 Also typically high-quality, this Office Chair and Rolltop Desk from number 58, Steaming Ahead.  They will spoil us rotten with all this nice furniture, you know. 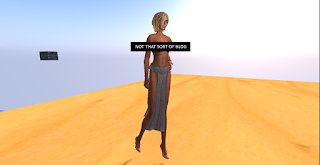 Ah.  Hm.  Yes.  This is the Hara outfit from number 59, Independent Objects, and I have had to edit that image, slightly.  Technically, it comes with two small silvery cones that make it just barely decent, provided I don't move about or breathe too heavily.  It appears to be a unisex outfit... frankly, I don't think there's enough of it to be gender-specific.  Nicely made, though.  And Tali, inexplicably enough, had no complaints. 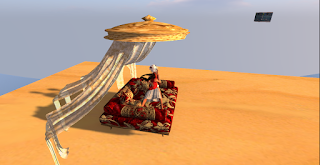 Strategic areas are obscured, here, by the selfless aid of a willing catlady.  This is the Khan's Lounger and separate Canopy from stop 60, Coveted, and it is a piece of work, indeed.  It would look very nice, properly adjusted and on top of something that wasn't plywood.  Tali and I had fun disporting ourselves on it.  (That particular sit animation needs some fiddling with, I think, though.  I'm sure Tali isn't meant to be sideways.  Or I'm not.  One of us is.) 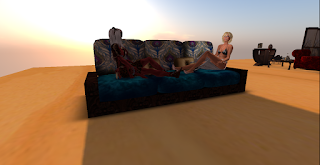 More disporting, this time on the Peacock Blue Couch from stop 61, ZYN.  It's more sedate sorts of disporting.  Also, by this time I had put a top on.  It was getting chilly.  ZYN was another place where I went berserk and bought some decorative features.  I think this shop is new to the Hunt, and I rather liked it, though the Gothic and spidery stuff there wasn't quite to my taste. 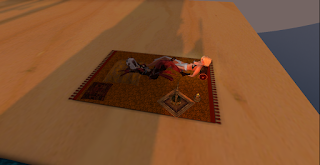 Yet more disporting, on the Xanadu Carpet Corner from number 62, Cog & Fleur.  The rug has scripted sit (and disport) animations, and so do some of the pillows and things you can scatter on it.  It's all rather a nice set, in fact. 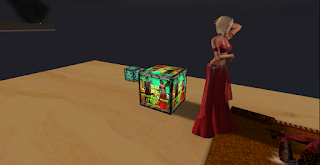 Outfit from stop  63, Adelle Arts.  I'm wearing the female version, and I was glad to be slightly more heavily dressed at this point.... You can see the gentlemen's outfit on the box, if you look.  (Actually, it probably looks better than that in reality.  Dunno why, but I never feel Adelle Arts's pack shots do the outfits themselves justice.  One way or another, I've got quite a lot of stuff from that particular shop.) 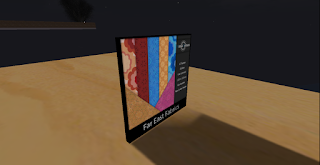 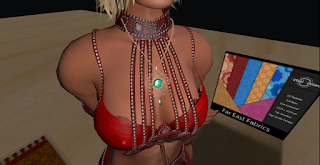 This is not an excuse to look down my top, it is an excuse to study the Jade Necklace - Rose Gold from number 65, Willow.  Rather hastily positioned, and it would look nicer if I'd spent more time getting it right! - which is my fault, and not the fault of the item. 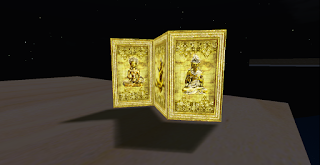 We have screen!  Actually, we have a screen with animated textures, courtesy of stop 66, SANNA Science and Art.  This is just one example, provided with the gift, of how to use the animated textures.  I have deliberately photographed this at an angle which foreshortens the panel in the middle, as the picture there is a little on the spicy side, and this is still Not That Sort Of Blog. 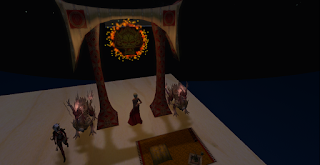 By now night had fallen, which turned out to be all for the best, as it showed up the particle and glow effects on this  Xanadu Gate from number 67, Rainy Fey Creations.  ObDisclaimer about creator Nyree Rain being a personal friend... but this is really quite a spectacular piece.  There is also an unscripted version, without the lighting effects, but if you have room for it, I say go with the lighting effects.  Splendid stuff. 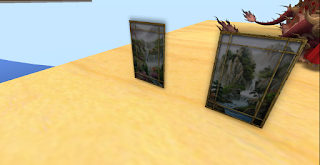 And so we reach the end, and the little bonus gifts thrown in once we arrive at stop 68, the Chinese Tea House back in Mieville, and submit our Hunt notecards and all that.  Here are two nice pictures - I turned the lighting back to "midday" so you could see the details - of a spring and a waterfall.  Says TD on them - TD, that's Timeless Decor, isn't it?  In any case, these are nice.  They liven up that big plywood square no end.

And so we reach the end! - and, once again, it's been a lot of fun, and that is down to the merchants who make these nice things and conceal them so artfully... and my fellow hunters who provide support and comradeship... and the organizers, under the very splendid Mr. Perryn Peterson as always.  Thanks to everyone, and see you on the next one!