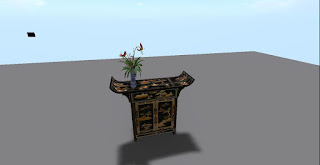 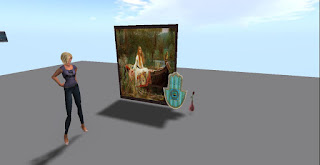 An assortment of decorative... things... from stop 22, Caramba.  A picture of the Lady of Shalott, a "Hamsa Home Blessings" hand, and a rose in a vase.  Very, um, assorted.  Which, I suppose, is kind of in keeping with the theme, really.  You found all sorts of things on the Silk Road. 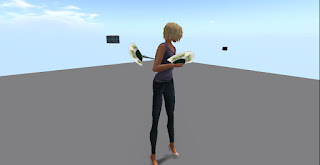 Mandarin fan and matching doll key from 23, Jinxed Toys and Magic.  The fan is animated so you can fan yourself.  Makes sense to me. 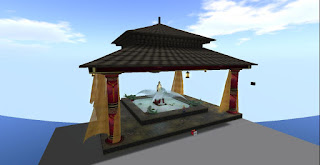 Rather nice Dragonfly Meditation Temple from 24, Tanelorn Manor Designs.  If you're going to meditate on dragonflies, do it in style, that's what I say. 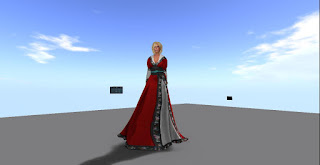 Mesh gown from number 25, Inara's Fantasy Couture.  Dramatic, but fairly modest.  Did no one show any skin in mediaeval Mongolia?  Perhaps not.  Perhaps they were sensible. 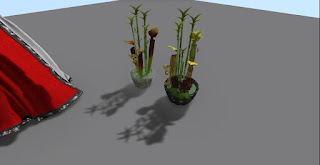 Number 26 is Zoe's Garden, and gives us a pair of  Mixed Silk Road Arrangements, one of them in a Dragon Pot, one in just a pot, I guess.  Look, I don't know about plants, all right? 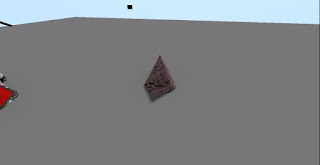 Texture pack from 27, All Things Beautiful.  Contents are interesting, conical thing is less so.  Sorry about that. 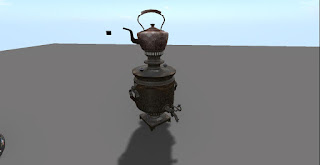 Here's something more visually exciting, a Silk Road Samovar from stop 28, Kittycat's Creations.  This not only looks the business, it dispenses twelve different kinds of tea.  If I was properly English, instead of being hopelessly corrupted into coffee-drinking, I would really appreciate that. 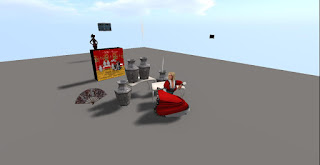 Gift set - fan,  "Dancing Fountain" (those vase things) and cuddle bench - from stop 29, XM Designs. Nice set.  Note catlady in bikini lurking in the background, in case I urgently needed to try out those cuddle animations. 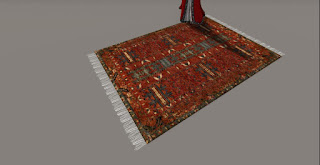 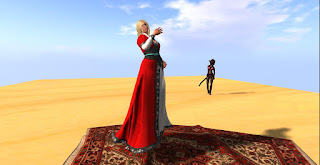 Stop 31 is Frolic Poses, and posed - ha! see what I did there? - a couple of minor problems.  Firstly, there's the matter of demonstrating poses in a static image.  Well, there I am, posing.  (They provided a couple of nice props, too, including that mesh rug I'm posing on.)  Secondly, they put these things in a box with a semi-transparent texture, and I clicked on a bit of the box that wasn't there, and accidentally deleted the thing I was standing on instead of the box, because I can be a dumb Glorf sometimes.  So I'm now on a boring plywood thing instead of the boring grey thing in the preceding photos.  If you were wondering, which you probably weren't, and after all, why should you? 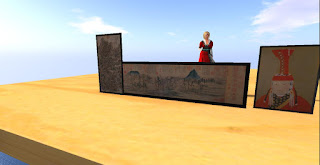 Stop 32 is Les Arts de Saint Bruno, and - as usual - they provide a whole pile of in-theme artworks, some of which I have rezzed here.  The matronly lady on the right of the picture is Mrs. Kublai Khan.  No, seriously, she is.  We'll be seeing more of her later. 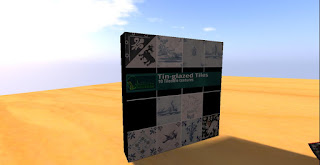 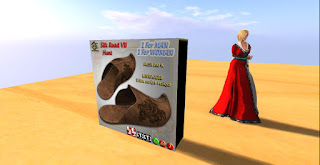 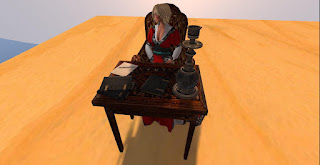 This is kind of nice - chair and desk from number 35, Emma's at Blue Moose.  (That "at" should be an @ sign, but this thing always tries to turn it into an email address when I do that.)  Anyway, this is "Emma's Dreaming of Xanadu", and it's pretty nifty, all things considered. 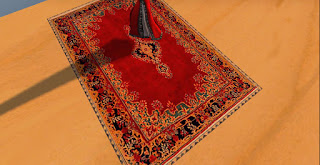 Number 36 is The Rug Shop, and they have provided us with... oh, you guessed.  It's a nice one.  It's a texture changer, with quite a wide range of high-resolution designs built in. 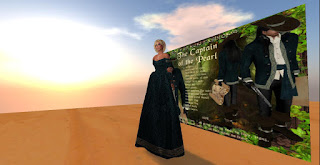 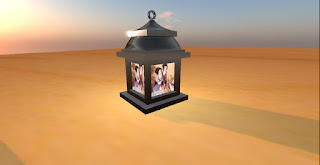 Number 38 is Lunar Seasonal Designs, and they give us this "On the Way to Xanadu" lantern.  It's scripted with a number of options.  If I was standing near it or something, you could see what size it was.  It's not particularly big.  It's pretty nice, anyway. 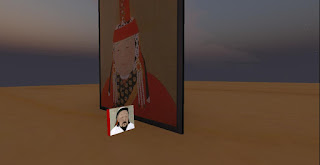 Number 39 is Illumination Library, and they have their own go-to style for gifts in the Hunts - they do these little books that recite poetry at you.  In this case, the person reciting is Kublai Khan himself, and he recites, at first, in Chinese, which rather baffled me.  Click on him repeatedly, though - which I am nervous about doing to the Great Khan, but he didn't have me bowstrung this time - and he goes into an English translation, in which, among other things, he talks of meeting a  "Pure Golden Face" upon a hill.  Clearly, this is a reference to his missus, so I dragged her portrait out of inventory again.  Don't they make a fetching couple? 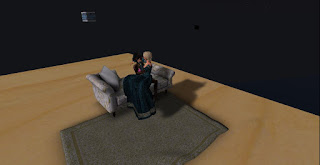 Finally, for this stretch at least, here's a Tabriz Chaise and matching mesh Rug, from number 40, Park Place Home Decor.  They do not provide the catlady in the pink bikini, though.  She just pitched in, selflessly, to help me check out the couples animations.  And I have no complaints!
Posted by Glorf Bulmer at 12:56 PM